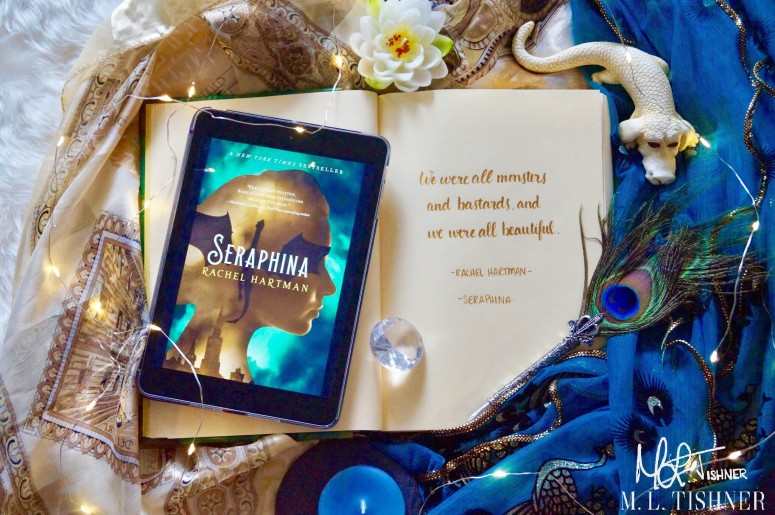 Four decades of peace have done little to ease the mistrust between humans and dragons in the kingdom of Goredd. Folding themselves into human shape, dragons attend court as ambassadors, and lend their rational, mathematical minds to universities as scholars and teachers. As the treaty’s anniversary draws near, however, tensions are high.

Seraphina Dombegh has reason to fear both sides. An unusually gifted musician, she joins the court just as a member of the royal family is murdered—in suspiciously draconian fashion. Seraphina is drawn into the investigation, partnering with the captain of the Queen’s Guard, the dangerously perceptive Prince Lucian Kiggs. While they begin to uncover hints of a sinister plot to destroy the peace, Seraphina struggles to protect her own secret, the secret behind her musical gift, one so terrible that its discovery could mean her very life.

In her exquisitely written fantasy debut, Rachel Hartman creates a rich, complex, and utterly original world. Seraphina’s tortuous journey to self-acceptance is one readers will remember long after they’ve turned the final page.

What I thought: Exquisite is the perfect word for this book. This was the first fantasy in a long time that didn’t feel like a typical medieval fantasy novel. The world felt slightly more modern but still other worldly. I loved Seraphina and her journey towards her own mental health and self love. It’s not everyday that you see a heroine fighting her own inner demons. Instead of slaying dragons – she technically is one and her prize is herself. It’s a beautiful message I feel a lot of young women should hear once in a while.

The Quote: We are all monsters and bastards, and we are all beautiful.

Why I chose it: So much of this duology is tied to Seraphina’s journey in loving herself. It’s such a great sentiment for people who don’t fill the “traditional” mold – they are still beautiful. Celebrate your differences! Dance to the beat of your own drum. Do it, I tell you!

Rachel Hartman lives and writes in Vancouver, BC.

Her first YA fantasy novel, Seraphina, was published by Random House on July 10th, 2012. Here are some things that are already being said about Seraphina by some fabulous authors:

“A book worth hoarding, as glittering and silver-bright as dragon scales, with a heroine who insists on carving herself a place in your mind.” — Naomi Novik, New York Times bestselling author of the Temeraire series.

“Seraphina is strong, complex, talented — she makes mistakes and struggles to trust, with good reason, and she fights to survive in a world that would tear her apart. I love this book!” — Tamora Pierce, New York Times bestselling author.

“Just when you thought there was nothing new to say about dragons, it turns out there is, and plenty! Rachel Hartman’s rich invention never fails to impress — and to convince. It’s smart and funny and original, and has characters I will follow to the ends of the earth.” — Ellen Kushner, World Fantasy Award-winning author.