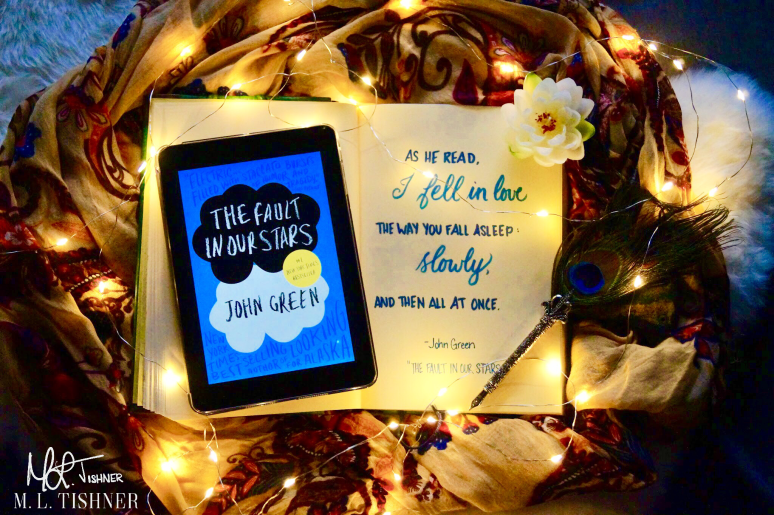 Despite the tumor-shrinking medical miracle that has bought her a few years, Hazel has never been anything but terminal, her final chapter inscribed upon diagnosis. But when a gorgeous plot twist named Augustus Waters suddenly appears at Cancer Kid Support Group, Hazel’s story is about to be completely rewritten.

Insightful, bold, irreverent, and raw, The Fault in Our Stars is award-winning author John Green’s most ambitious and heartbreaking work yet, brilliantly exploring the funny, thrilling, and tragic business of being alive and in love.

What I thought: I didn’t realize it at first but the book takes place in Indianapolis, my hometown. It was fitting that while on a plane leaving the US for Germany I was reading a story that was connected to my home. Green didn’t focus too much on there where (my old Nap town haunts) since the story focused on the people.

There are many people out there who swear by this novel. They believe it is the greatest novel of our and every other generation.

I am not one of those people.

I enjoyed the prose and the witty banter of the two main characters Hazel and Gus. It was obvious that these two kids were too old for their age (wise beyong their years) but with the ticking time bomb that is cancer, one should not waste time.

I was very moved by this story. I wasn’t moved to tears like others but there were some definite feels. I highly recommend this beautiful story of young love with a little cancer thrown in.

The Quote: As he read, I fell in love like you fall asleep: slowly, and then all at once.

Why I chose it: I am a sucker for a good quote describing the feeling of falling in love. While the feeling is nothing like it, I appreciate how writers can fully capture the felling.

John Green’s first novel, Looking for Alaska, won the 2006 Michael L. Printz Award presented by the American Library Association. His second novel, An Abundance of Katherines, was a 2007 Michael L. Printz Award Honor Book and a finalist for the Los Angeles Times Book Prize. His next novel, Paper Towns, is a New York Times bestseller and won the Edgar Allen Poe Award for Best YA Mystery. In January 2012, his most recent novel, The Fault in Our Stars, was met with wide critical acclaim, unprecedented in Green’s career. The praise included rave reviews in Time Magazine and The New York Times, on NPR, and from award-winning author Markus Zusak. The book also topped the New York Times Children’s Paperback Bestseller list for several weeks. Green has also coauthored a book with David Levithan called Will Grayson, Will Grayson, published in 2010. The film rights for all his books, with the exception of Will Grayson Will Grayson, have been optioned to major Hollywood Studios.

In 2007, John and his brother Hank were the hosts of a popular internet blog, “Brotherhood 2.0,” where they discussed their lives, books and current events every day for a year except for weekends and holidays. They still keep a video blog, now called “The Vlog Brothers,” which can be found on the Nerdfighters website, or a direct link here.